Imagine if Austin Powers had a TARDIS and Tarkovsky helped decorate. The Mission Chantry was an experiment conducted by an Etherite in creating a "self-cleaning party pad", and this Barbarella abomination represents his unlikely success. Unfortunately, the mage in question tried a second time some years later, and did not survive the attempt, so this little pocket in the city is one of a kind.

The chantry is tucked away in a San Francisco stick home on Clarion Alley in the Mission District. Its location may be known by mage characters as common IC knowledge, but if you are playing a character who is not explicitly a mage, you must learn on screen, ICly, in a scene. 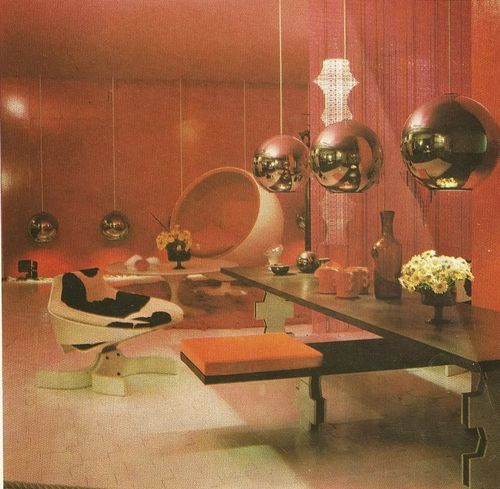 The Charter of the Golden Gate Chantry

Any Awakened who has not yet been initiated to a Tradition, but is seeking membership into the Traditions may be allowed access to the Chantry on a provisional level, provided that a Member in good standing sponsors them, usually of the Tradition the Apprentice seeks Initiation with.

Any acolyte or consor working for one of the Nine Traditions. The Associates report directly to the Advocate for the Tradition they represent in all Chantry matters. Associates receive the benefits of the Chantry’s protection when they are in the process of completing a task for the Chantry. Associates may attend Advocate Council sessions as well as other official Chantry business at the direct request of their Advocate.

Each Tradition may appoint one of their Fellows or Masters in the Chantry to sit on the Advocate Council. The Council is empowered to discuss business that has been brought to the attention of the Chantry.

The Advocate Council is required to select one member of the Council to act as Chairperson for the Council.

The Chairperson is empowered to preside over any Advocate Council session as well as any Chantry business to which they attend. They may call the sessions to order and bring them to a close at the end of business.

The Chairperson is responsible for ensuring that each issue brought to the council is discussed. The Advocates may speak first on each issue, afterwards, the Chairperson must recognize any general member who wishes to speak on the issue.

The Chairperson is responsible for holding and keeping the tally for any vote brought to either the Advocate Council or the general membership.

All members are reminded that as representatives of the Council of Nine Traditions, we are required to uphold our laws, known as The Protocols. The Protocols are summarized here for review.

Protection of the Chantry

At any time, if any member of, or the Chantry as a whole, is in danger of being harmed or destroyed, it is expected that all members of the Chantry who are able to assist come to the aid of the member or Chantry.

In these situations, it is expected that the first responding Master or Advocate lead the members in the defense. If no Masters or Advocates are able to respond, a Fellow is expected to take up the lead in these cases.

Where possible, every care must be taken to protect the Sleepers from witnessing too much or coming to harm themselves.

If, during the protection of the Chantry, it becomes clear that the Chantry structure itself will fall, the members must do what they can to save any of the Library materials, as well as seal off the Node until we may reclaim it. We are not expressly worried about saving the slush fund safe.

We are aware of the existence of Night Folk in the SF Bay area, most prominently Vampires, whose population we do not currently know.

Night Folk of any kind are banned outright from access to the Chantry as well as any other building, property, or territory claimed as owned by the Chantry.

Interaction with Night Folk is not prohibited to members of the Chantry, but do be reminded, many of the Night Folk are enemies of Ascension, especially Vampires and their ilk.

It is to be assumed that members of the Disparate Crafts (possibly representing the so-called Disparate Alliance) exist within the San Francisco area proper. These Awakened are barred from access to the Chantry as well as any property owned by the Chantry, with the exceptions noted for Orphan Mages below.

Orphan Mages may also exist in the San Francisco area proper. While more of these seem to be joining the Disparate Alliance everyday, they can be recruited into the Nine Traditions. As such, an Orphan Mage who receives sponsorship from a member in good standing may enter the Chantry and join it as an Apprentice, if accepted by a vote of the Advocate Council. These Orphan Mages may become full members of appropriate rank upon Initiation to one of the Nine Traditions.

The Fallen Mages referred to as Marauders are a danger to both Awakened and Sleeper alike. If any Member, Apprentice, or Associate of the Chantry suspects the existence of a Marauder in the area protected by the Chantry, it should be reported immediately to the Advocate Council for immediate discussion. Under no circumstances should contact be made with a Marauder without the Chantry’s full involvement, except in situations of self defense.

The Fallen Mages referred to as Nephandi are a danger to both Awakened and Sleeper alike. If any Member, Apprentice, or Associate of the Chantry suspects the existence of a Nephandus in the area protected by the Chantry, it should be reported immediately to the Advocate Council for immediate discussion. Under no circumstances should contact be made with a Nephandus without the Chantry’s full involvement, except in situations of self defense.

1. Any Member may practice their Magick within the Chantry proper.
2. Any Apprentice may practice their Magick within the Chantry proper when accompanied by their sponsor, or during an educational session as part of the lesson.
3. Certamen may be conducted on Chantry grounds in the room constructed specifically for such.
4. Summoning Spirits is allowed in the Chantry provided the member have at least one other member on hand in case control of the summoning is lost.
5. Any attempt to unweave the effect holding the bong known as “Vlad the Inhaler” into its current form will be charged with crimes, up to Betrayal and an Endangerment of the Chantry and will be punished as such.
6. Any member of the Chantry caught on Chantry property with, or under the effects of, drugs manufactured by Holland Samuels III, known member of the Solificati, will be charged with the Low Crime of Minor Recklessness and punished as such. One would hope that the members of our Chantry would be smarter than that.